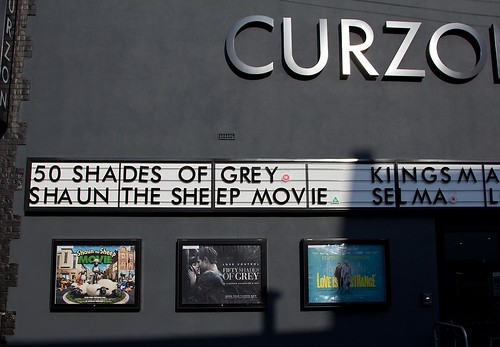 Just over a week ago, the first 50 Shades of Grey movie was released in movie theatres (it was No. 1 at the box office in its first weekend of release, though reports this weekend say the box office for the film has dropped 70% in its second weekend, though it remains at No. 1).

A lot has been said about 50 Shades of Grey. The conversation started back when the books really hit the mainstream, then picked up steam when the movie was announced, then cast, and then when it finally hit theatres last weekend.

(Heck, I even have to thank 50 Shades of Grey for a tweet I sent about it during the Golden Globes being my most retweeted tweet ever and highest analytics I’ve ever seen on a tweet  (more than 6,500 impressions, 37 retweets and 35 favourites):

Please let this be the only time we see the cast of 50 Shades of Grey at an awards show. #GoldenGIobes

So from that tweet, you can likely guess what I think about 50 Shades of Grey.

I read the book, just the first one. I stopped there. The writing is dreadful, which made it hard to carry on. But even more so for me was the character of Christian Grey.

So with the recent release of the movie, it’s only natural that this debate of “Is Christian abusive” debate has kicked into high gear again. Only now, there’s a dangerous undercurrent of discussion from those who are (mainly) pro-50 Shades of Grey: If you don’t like it, don’t read it and shut up about it already.

This bothers me on many levels. Yes, I don’t like 50 Shades of Grey. And yes, because I don’t like it, I stopped reading after book 1, and I won’t see the movie (not even to see how bad it is). But that doesn’t mean I don’t have a right to voice my opinion, and concerns, just as those who love the series are.

I voiced my opinion via a Twitter essay last week, but wanted to voice myself here as well, as sometimes 140 characters just isn’t enough.

5. Here's the thing: no one chooses to be in an abusive relationship.Once in, many find it nearly impossible to break free. #50ShadesOfGrey

7. While books are fiction, do you want your daughter to believe love is strong enough to change a man who controls her? #50ShadesOfGrey

9. Also concerned by women defending the books by saying their experience with abuse proves Christian is not abusive. #50ShadesOfGrey

10. No 1 experience w/ abuse is the same. By saying something constitutes abuse more than another, we diminish other women. #50ShadesOfGrey

Can’t we all be allowed to express our opinions? Especially when it comes to literature, film and art?

I don’t have to like 50 Shades of Grey even if you do, but it doesn’t mean my opinion is less valid than yours because of that. Telling me to just not read a book or watch a movie doesn’t help anyone. But this does:

If you disagree with someone, debate them.

(That was from Warren Kinsella who wrote a must read piece about the death of Sun News Network, no matter what you thought about the network).

So please, 50 Shades of Grey fans, why don’t we have a debate? Or agree to disagree? But let’s stop calling each other’s opinions wrong or stupid. After all, that doesn’t solve anything.

Now, the stars of 50 Shades of Grey present an Oscar tonight, I don’t even know what I’ll do…