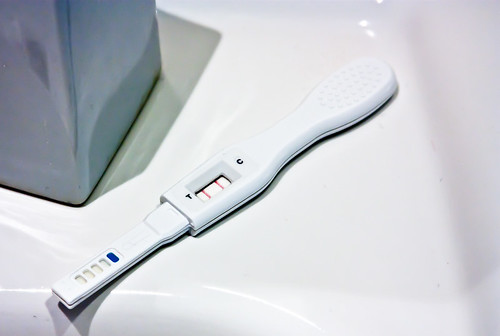 A year ago this past Wednesday, I took a test that I thought was going to change my life.

I had been feeling crappy for a week. My stomach bothered me, I was tired, I just felt off.

“Maybe you’re pregnant,” my then-boss half-joked during a Starbucks run.

“Impossible,” I said, but on the inside, I began to think.

It was possible, I realized. It could be.

That night, I went straight to bed after work, as I had most nights that week.

As I lay in bed, wondering when I would feel like myself again, my boss’ words came back to me. “Maybe you’re pregnant.”

I knew I had a pregnancy test buried in our bathroom as a just in case test. I got up and went digging. Under the sink at the back of the cupboard I found it. I looked at the wrapping. It had expired the month before.

I shurgged and decided to take it anyway.

Three minutes later, I turned over the stick. Two lines were staring back at me.

Well one strong line, and a faint line. It was the first time I had ever seen two lines.

“Um, honey, can you come here for a second?” I call down to my husband, who was playing video games.

“Is everything OK?” he called back.

“Um, I really need you to come here.”

“What’s going on?” he called again from downstairs.

I heard him pause his game. When he came into the bathroom, I showed him the stick.

“That second line is pretty faint,” he said. “Maybe we’re just half pregnant.”

Unsure about what to do next, I thought taking a pregnancy test that wasn’t expired was important. So with a 30 minutes until our closest Shoppers Drug Mart closed, we went to get a pregnancy test.

I got two, just to be safe.

I took the second one when we got home. Positive.

I called my doctor the next day and left a panicked voice mail.

“Hi, um, I need to see the doctor because, like, I took a pregnancy test. And it was positive. And I don’t know what to do. And I’d like to know if it’s true. So could I get in today or tomorrow? Please?”

I got an appointment for the next day, January 15. As we held hands, my doctor confirmed we were expecting.

A year later, you’d expect we had a three month old child. I’d be complaining about sleepless nights, talking about diapers and sleep schedules. But that wasn’t in the cards for us.

My husband and I miscarried six weeks after finding out we were pregnant, on the eve of our 12th week.

It’s been a long road, and hard to believe it’s all happened in just one year.

I can no longer remember what it felt like to be pregnant. I have some idea, but not the way I once did.

I know I don’t want to lose what we lost ever again.

Because of this, we’re not trying again. Not right now.

But for today, I remember sitting in the bathroom, holding a positive pregnancy test in my hand and being terrified.

While I don’t have the infant I expected, I am so glad to still have my husband by my side. I don’t know that I could have gotten through the last 365+ days without him.